Investment Excellence and The Hunt for 7-Footers In 1951, after I graduated from school, I used Moody’s and S&P manuals as my sources of information. I went through them page by page. I was like a basketball coach looking for 7-footers. I still have to find out if he’s coordinated, and can stay in school. But if someone comes up to me that’s 5’6” and says, “Wait ‘til you see me handle the ball,” I say “No thanks.”

In basketball, height is not the only thing — it’s a super important thing. Very tall basketball players can still fail. But their height gives them a far-above-average chance at success. That is why basketball coaches gravitate toward extremely tall players.

Investments work the same way. A truly great investment is like the proverbial 7-footer; they are a rare outlier, out at the edge of the bell curve in terms of probability. But when you do find one, you’ve seeded the potential for an excellent result. 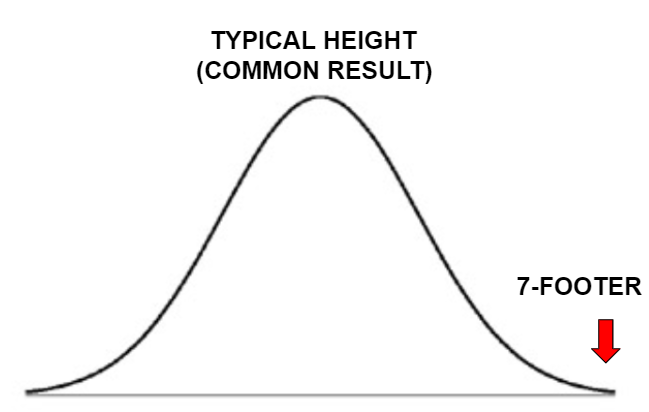 The peak in the middle of the bell curve represents a clustering of data points around the most common result, like the average height of people in a town, where the greatest number of people are 5 feet, 9 inches. The further out to the left or right of the bell curve, the more rare of an occurrence something is. That is why such data points are outliers.

It’s the rareness of the outlier that Buffett made a point of in his analogy. The investment ideas he favors are similarly rare — like a 7-foot teenager in a town full of normal-sized people.

But where do 7-footers come from? How do they come into existence? In the case of humans, it’s a matter of genes.

For example, the retired NBA basketball player Shawn Bradley is 7 feet, 6 inches tall. A geneticist named John Kauwe did a gene study on Bradley to see where his height came from. As it turned out, Bradley’s gene combination is so rare it was almost literally off the charts.

The following bell curve distribution, via the Wall Street Journal, shows Shawn Bradley’s predicted height score based on his genes (he is the data point way off to the right).

In the case of investment opportunities, the kind of 7-footers Buffett favors also have a unique combination of variants. There are many different factors that go into making a company or a crypto asset a great investment, or possibly even a spectacular investment. They only come together rarely.

The rarity of truly great investments is one of the reasons we track our roster of billionaires.

The billionaires we track are some of the smartest investors in the world, and they allocate huge amounts of time, money, and resources to finding the best investment ideas. This makes them the investing world equivalent of professional basketball coaches, with armies of trained talent scouts (analysts) constantly monitoring and surveying the investment landscape for their next 7-foot prospect.

We also track the newsletter picks of many brilliant thinkers, some of them good friends, for the same reason. These experts have incredible investment-finding processes that they’ve honed over many years.

So instead of trying to replicate that legwork, we can see when a brilliant investor finds a new 7-footer candidate (through 13F reporting if they’re a billionaire, or a newsletter if they have one) and then track that investment, too.

Once you’ve found a 7-footer candidate and invested in it — with the appropriate position size of course — the next step is having a method for staying with the position. Because 7-footers don’t come along every day, you want to maximize them to realize the full investment potential.

Getting into a great investment and then selling it prematurely would be like getting Shawn Bradley on your basketball team and then trading him away because of a bad game or two.

Psychologically speaking, sticking with a 7-footer investment can be just as hard as making the investment in the first place. That is why the legendary trader Jesse Livermore said men who can “be right and sit tight” were incredibly rare on Wall Street.

The way to excel at sticking with 7-footer investments is with a combination of knowledge, psychology, and software.

A working knowledge of outliers and awareness of the fact that great investments are rare in the first place can help reduce the temptation to sell too quickly when you get your hands on one.

At the same time, the psychology of delayed gratification, with a healthy focus on long-term outcomes rather than immediate rewards, can reduce the temptation to be impatient.

And last but not least, monitoring your investments through TradeStops’ red-yellow-green system, which lets you know when an investment is safe to buy, wise to hold, or smart to sell, can add a layer of vital objectivity to the process with the help of data-based signals that exist outside your emotional brain.

Remember, we aren’t talking “buy and hold” exactly. The best 7-footer investments have the ability to trend in the green zone for years at a time. But if they go into the red zone, it’s generally wise to let them go or step to the side until green zone status returns. (This is vital for the preservation of capital, and it’s one of the ways in which our red-yellow-green system powerfully improves on the billionaire’s historical results.)

Exceptional investing results are more about the choices an investor makes than any special talent or hidden information that investor might have. This goes for everyone, and it includes the choice to pursue outlier ideas (Buffett’s 7-footers) in a rational and logical way — and the choice to stick with them once you’ve found them, for just as long as it’s rational to do so.

The good news is, with the right knowledge and psychology and tools, we can all get better at generating outlier levels of investment success.