No matter what your thoughts are on Bitcoin and the other cryptocurrencies, an investor needs to be able to make an informed decision based on signals, not noise. Right now, our indicators are bullish on Bitcoin.

Bitcoin was introduced in January 2009 and has been growing in popularity over the past 8 years. It’s been called everything from “the currency of the future” to “the next tulip-mania.”

It’s becoming more mainstream and people are beginning to pay attention to it. That tends to happen when an investable asset soars from $600 to $4800 in just the past 12 months.

When you’re dealing with that level of rapid growth, it’s more important than ever to try to separate the signal from the noise and to make sure that if you’re going to get onboard, you do so in a way that still lets you sleep at night.

For me, the first thing I always look at is, of course, the Volatility Quotient (VQ). Given that Bitcoin has been trading for 8 years now, we can calculate its VQ. The current VQ on Bitcoin is 41.6%.

A VQ of 41.6% is a high-risk investment. To put that in perspective, the current VQ on GDXJ, the VanEck Vectors Junior Gold Miners, is 42.7%. So Bitcoin is about as risky as the junior gold miners.

We’re also able to put together a Stock State Indicator (SSI) chart on Bitcoin. I was amazed at how well our SSI indicators have worked for Bitcoin. Take a look : One of my favorite ways to use the SSI system is to look for investments that have dipped into the SSI Yellow Zone and then moved back up into the SSI Green Zone with strong support from a positive SSI Trend. That strategy has certainly worked well for Bitcoin.

Since 2012, every time that Bitcoin has moved from the SSI Yellow Zone back into the SSI Green Zone, the price has shot higher by an average of almost 600%. 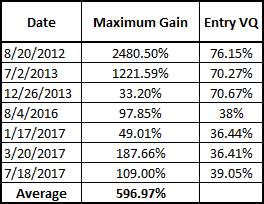 It’s a solid strategy for those looking for a good time to dip toes into the Bitcoin waters. The top of the SSI Yellow Zone on Bitcoin today is about $3,300. A dip below $3,300 followed by a rise back above $3,300 is what I’ll be keeping an eye out for.

One thing to note, we’re not currently tracking Bitcoin in TradeStops. You’ll just have to keep reading our Friday editorials for my latest signals on Bitcoin for now.

We also applied our proprietary time-cycle forecasting algorithms to Bitcoin and found an important cycle that lasts for slightly more than 8 months. Right now, the 8.6 month time-cycle is forecasting a move lower into the end of October or early November. If the projected downtrend of the time-cycle proves to be accurate, we may get that opportunity to see Bitcoin in the SSI Yellow Zone again before the end of the year.

Right now, I have to say that the signals on Bitcoin overall are bullish. We always have to keep in mind, however, that there’s a LOT of noise in Bitcoin… 41.6% to be precise.

You can chalk up 41.6% of Bitcoin’s up or down moves as pure noise… totally unpredictable. If that much uncertainty is more than you can stomach, then it’s best to stand aside. It’s more important that you be able to sleep well at night.

How do you do invest in Bitcoin and still make sure you can sleep at night? You make sure you decide how much you’re willing to lose if you’re wrong or too early and then invest accordingly.

Speaking of relaxation… I hope that you all enjoy a wonderful holiday weekend,